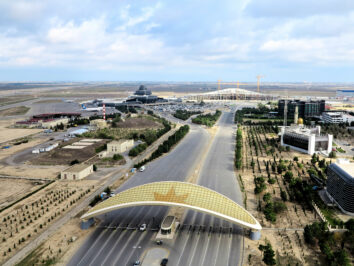 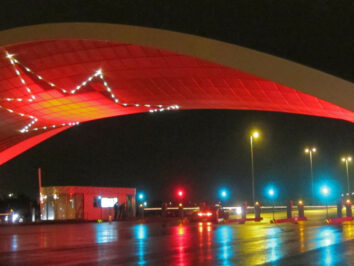 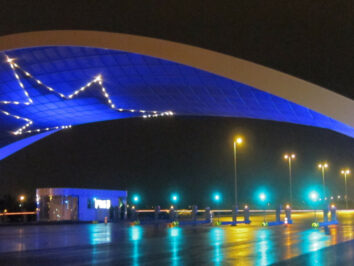 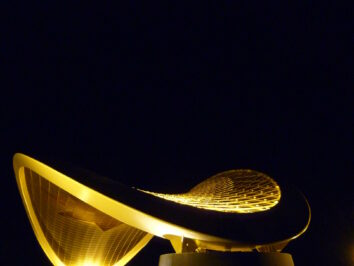 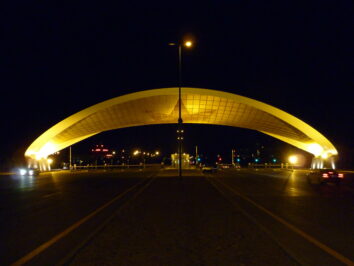 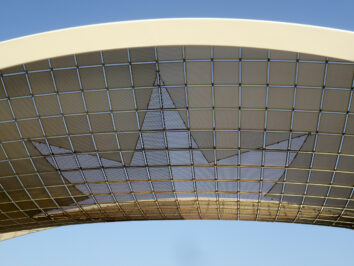 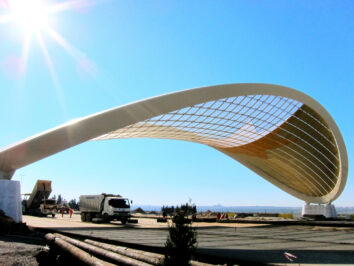 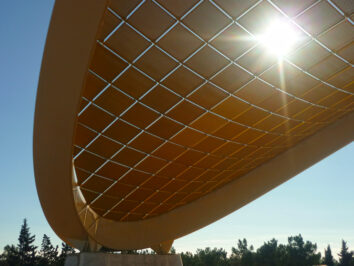 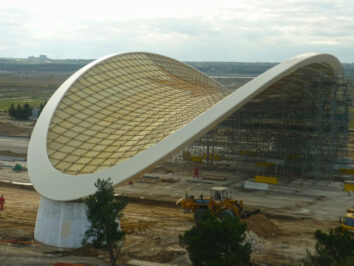 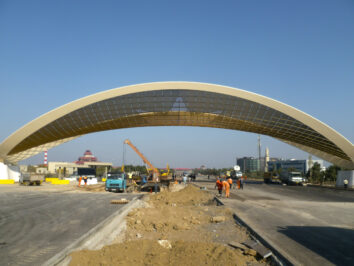 The stunning elliptical arch entrance greets visitors to Baku airport both by road and by air. Just over 72 meters wide and 28 meters deep, it is a feature arch greeting air traffic and bidding farewell to those departing. To enhance the geometrical shape, the structure is secured by only ... two concrete fundaments. The smooth architecture of the arch is accentuated by a clear interface at the support points of the concrete pedestal on which it sits to ensure a smooth transition from arch to ground level.

The arch is comprised of a steel structure supporting a cable net assembly which in turn supports the array of suspended gold coloured perforated panels. To work towards an efficient construction period, the pipes and steel plates which make up the main structural ring, or carrier frame were prefabricated off-site using specialist, bespoke moulds and delivered to the construction site in the correct dimensions. Following the main structural steel construction, 20 locally fabricated support elements were mounted to the construction frame by a mobile crane, working from one support point to the other, before finally being welded together on site. The cable assembly was enabled by pre-loading the ring carrier beam to replicate the expected 180mm deflection at the middle of the span, followed by suspending 800 panels of golden expanded metal in a grid of 1.40 meters using 53 longitudinal and 19 transverse cables with single point fixings.

The Azeri star as the national symbol of Azerbaijan is prominently depicted at the centre of the span. This was embedded in the suspended panels by using a darker shade of gold. Waagner Biro Steel and Glass drew on their wealth of understanding of the fabrication processes and innovation required to deliver these deceivingly complex steel components.

As a result, the project was completed on schedule at the end of 2010. Only one year on from initial planning. The tollgate functions as a connective feature for the airport and the city of Baku. Due to its visibility from air traffic, the tollgate required a distinctive character for a wider audience both at day and night. The night character of the tollgate is enhanced by an atmospheric light concept.

The Project is the winner of the „European Award for Steelstructure 2011“.